‘Tis the season for sharing so here’s a prioritisation exercise with a festive twist to highlight the pros and cons of different styles of prioritisation.

The idea came from a conversation last year with my daughter when she asked for us to have Christmas at home but with minimum stress for everyone, particularly mum. We discussed this light-heartedly for a few minutes and came to the conclusion that having the family together, eating baked beans on toast, in onesies, in front of the telly, with a few presents would count as a good Christmas. Needless to say her brothers had different ideas, but the concept of a Minimum Viable Christmas (MVC) had been born.

What is Christmas for you?

In a MVC workshop last week I started by asking this question and got everyone to put their elements of Christmas on individual post-it notes. This forms our “backlog” for Christmas 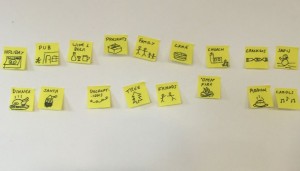 Agile teams are encouraged to rank any backlog in strict priority order and so I asked the workshop to do this on the Post-its already captured.

Inevitably and consistent with most agile delivery teams, people couldn’t agree on a strict priority order and even when one “Product Owner” was nominated that person couldn’t prioritise between wine, dinner and pudding.

As an aside, the concept of a “Product Owner” for Christmas seems fundamentally wrong and (while possibly an extreme example) this highlights one of the key issues with the concept of having one individual making the decisions about a product; buy-in from the broader stakeholder community.

They were then asked to identify the elements of Christmas without which the occasion would be meaningless i.e Minimum Viable Christmas. This they found reasonably easy in that they just drew a line under wine, beer, dinner and pudding. However there was a lot of conversation about not working around Christmas, the “holiday” post-it, and “church”.

As with my family, everyone’s minimum viable was different but all agreed that if there was additional time and money they would add other people’s highest priorities into their Christmas. This gave us a natural segway into using MoSCoW.

One of the really interesting things that came out this discussion is that the team said that their priorities changed with a different question being asked. Specifically you’d expect MVC and the Must’s to be the same, but they are not…Santa left the building and Jesus came in.

My thought afterwards is that asking 3 different questions put different lenses on the problem or perhaps a team needs to be asked 3 times in slightly different ways to get to the crux of the issue.

The workshop immediately identified that if time and money were short they could de-prioritise the coulds and if they were really up against it “cake” from the shoulds so when you have a hard deadline like the 25th December MoSCoW is a crucial prioritisation technique.

I did consider introducing other value based prioritisation methods such as those promoted by SAFe but really…come on…how can you put a monetary value on being with your loved ones at Christmas?

Merry Christmas and a prosperous New Year everyone!

Many thanks to Rick Threlfall for drawing the Post-It’s

Jeremy is the Managing Director for Innovation at Fimatix. He is a visionary digital transformation authority. He’s helped the UK government transition to be one of the most effective public organisations to embrace the benefits of tech. Read more
LinkedIn Twitter

‘Declare “victory” and move on’ is a pragmatic way to frame the closing of a long running project where the vision/ambition was ground-breaking but with the passage of time it has become clear that the project has become bogged down, it will not deliver the vision and so people want as positive way as possible…
Continue reading
Agilesphere and Fimatix are today (9 April 2020) announcing their merger. By combining their complementary expertise, this move will create a leading Govtech and Fintech business: Agilesphere, a Fimatix Group company. The purpose of the combined entity will be to enhance the productivity of business and governments to the benefit of economies, communities and people…
Continue reading
The chancellor announced last week (Tuesday 7th January) that the changes to the off payroll tax (commonly known as IR35), extending the 2017 changes for the public sector to the private,  will go ahead in April.   The review that they announced at the same time which “will determine if any further steps can be taken…
Continue reading